Cryogenic Ion Vibrational Spectroscopy (CIVS) is designed and built in house to meet experimental requirements. Electrospray ionization (ESI) is used for its ability to retain condensed-phase structure and primary solvent interactions. Thus we will be able to isolate intermediates and transient complexes from solution. Isolated species are cooled (~10 K) in a cryogenic ion trap to lock the motion of these large molecules into well-defined local minima along the reactive landscape. This isomer-selective vibrational spectroscopy will be used to interrogate the mass selected-cold complexes. The detailed snapshots of these reactive species are then compared to theoretical predictions making connections to experimental reaction kinetics and mechanisms. An outline of the instrument is showed below. 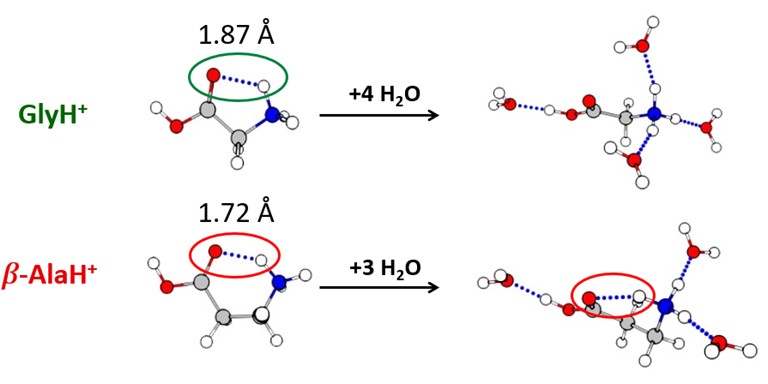 Conformational changes of protein and peptides, especially due to different amino acid substituents and solvation, is of interest across many fields of science. Structure determines function, thus it is important to probe the various intramolecular H-bonding and H-bonding to its aqueous environment interactions. However, there are many challenges of analyzing a proteins full local environment due to their spectral complexity. Thus small peptides can be used as model systems to determine the effect of various side chains and microsolvation on conformation populations. The microsolvation of various amino acids can describe how solvate affects intramolecular bonding. Protonated tripeptides are simple enough molecules but are large enough to have flexibility which makes IR spectra complicated. Cryogenic Ion Vibrational Spectroscopy (CIVS) will be used to highly resolve structural features from these peptides. From these model systems, information can be extrapolated to larger peptides. 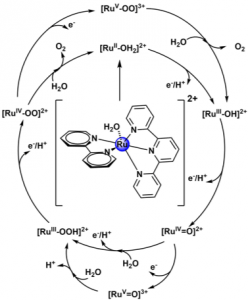 In an effort to find alternative energy sources to fossil fuels, there is much interest in coupling water oxidation and CO2 reduction reactions to create “solar fuels”. Through water oxidation, the following reaction occurs: 2H2O à 4H+ + 4e– + O2. The de facto representative of homogenous mononuclear water oxidation catalysts is [RuII(bpy)(tpy)(H2O)]2+, or more simply [RuIIH2O]2+. Some of our previous work with this catalyst involves using our home-built tandem time-of-flight photofragmentation spectrometer to perform cryogenic ion vibrational spectroscopy (CIVS) studies on [RuII(H2O)]2+ and its first intermediate [RuIII(OH)]2+. In particular, we have performed the stepwise water solvation of [RuII(H2O)]2+ and [RuIII(OH)]2+ to unravel the effects that solvation has on assisting proton-coupled electron transfer (PCET) in the catalytic cycle.

Recent focus in our group has moved to characterizing the [RuIV=O]2+ and [RuV=O]3+ intermediates, which are involved in the O-O bond formation step. This O-O bond formation step proceeds through a water nucleophilic attack of the electrophilic Ru=O bond, and it is the rate limiting step and reaction bottleneck for this catalyst. Kinetic evidence and our calculations suggest that the [RuIV=O]2+ intermediate is significantly less reactive with H2O than the [RuV=O]3+ species, which may be due to the Ru=O bond being less electrophilic in the [RuIV=O]2+ species than the [RuV=O]3+ species.

Experimentally, we form these highly reactive intermediates in an octopole ion trap by introducing a buffer gas mix of O3/O2 to [RuII]2+ or [RuIII]3+, and then capture them by evaporative quenching of collision complexes. This has allowed us to isolate the [RuIV=O]2+ species and will allow us to later focus on isolating and probing [RuV=O]3+ using cryogenic ion IR predissociation spectroscopy. These predissociation spectra allow us to determine the Ru=O stretching frequencies of these two intermediates, which can be confirmed through isotopically labeled 18O substitution. In particular, the frequency of the Ru=O stretching mode is likely sensitive to the electronic structure of the Ru=O bond. Also, with the addition of our dual reaction traps, we will cluster water on [RuIV=O]2+ and [RuV=O]3+ in order to elucidate the water bonding orientation and arrangement, which will reveal if the water acts as a nucleophile, or if it is the Ru=O that is the electrophile in the water addition step. 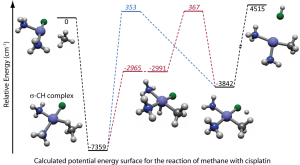 The formation of sigma-CH complex, an intermediate step between uptake and activation in catalytic alkane functionalization reactions, has been inferred from numerous kinetic and mechanistic studies, but the complex itself remains elusive.  In our study, we use electrospray ionization (ESI) and cryogenic gas-phase ion chemistry to form and trap reaction intermediates in C-H activation by Pt(II) complexes, and characterize them by H2-tagging and infrared vibrational predissociation spectroscopy (CIVS).  The experiments allow for the isolation of the crucial sigma-CH complexes and other intermediates, as well as provide detailed structural information on these complexes, shedding light on the metal-CH interactions that potentially dictate the catalytic selectivity and rate.  Furthermore, the influences of various ligands on the structure of these intermediates and interaction strength of Pt(II) with the CH bond are systematically and quantitatively investigated by closely monitoring the relevant vibrational frequencies.  The results from these studies can be compared to previous kinetic and mechanistic experiments to produce a comprehensive picture of the catalytic mechanisms as well as used for a stringent test for the various density functional theory (DFT) methods used to model these reactions.